Greenwood scored 21 second half points to pull away late and defeat the Raiders 35-7 Friday night in the season opener for both teams. The Raiders trailed just 14-7 at the half, but could not find the end zone in the second half despite moving the ball into Greenwood territory on several occasions.  Three turnovers 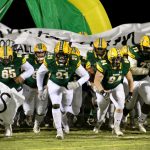